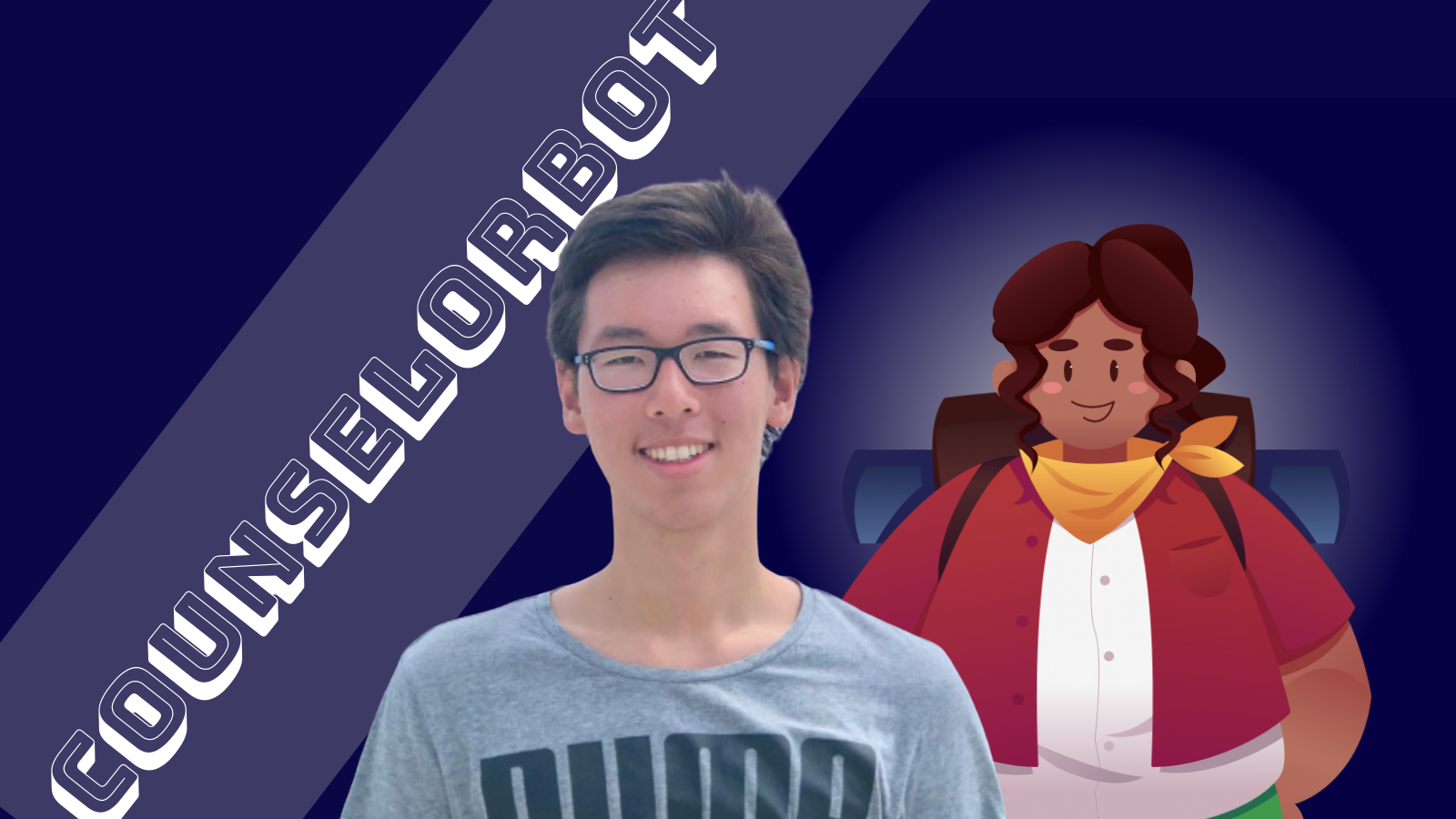 “I accidentally merged this branch. Why isn’t this bot opening a new issue? How do I resolve these merge conflicts?”

These words were said numerous times by countless students across the 2021 Summer Cohort of the Bit Project Serverless Camp. Throughout the curriculum, the Counselor, which is a Github bot deployed on Heroku, continuously opened new issues, tested code, and made sure that the student was learning.

You're right. The bot absolutely does work, but it does have a few annoying quirks (covered below). No product is perfect on its first iteration, and that's why even the largest of companies continously roll out updates for their services. That's where the idea of CounselorBot Saves The Day came from.

I wanted to help make the experience of students who use the CounselorBot in the future have an easy-to-use method of navigating the Serverless course.

With more features, bug fixes, and the latest technologies, CounselorBot Saves The Day is a new and improved version of the original CounselorBot. This results in a better user experience and more closely replicates the real-world experience of contributing to an open-source repository.

Hi there! I'm Ganning Xu (he/him), a junior at North Carolina's School of Science and Mathematics. I first got into programming after taking Python Programming I in ninth grade, and I fell I thought, "this is something that I WANTED to do." Outside of programming, some of my hobbies include swimming and trying new food (I love to eat). 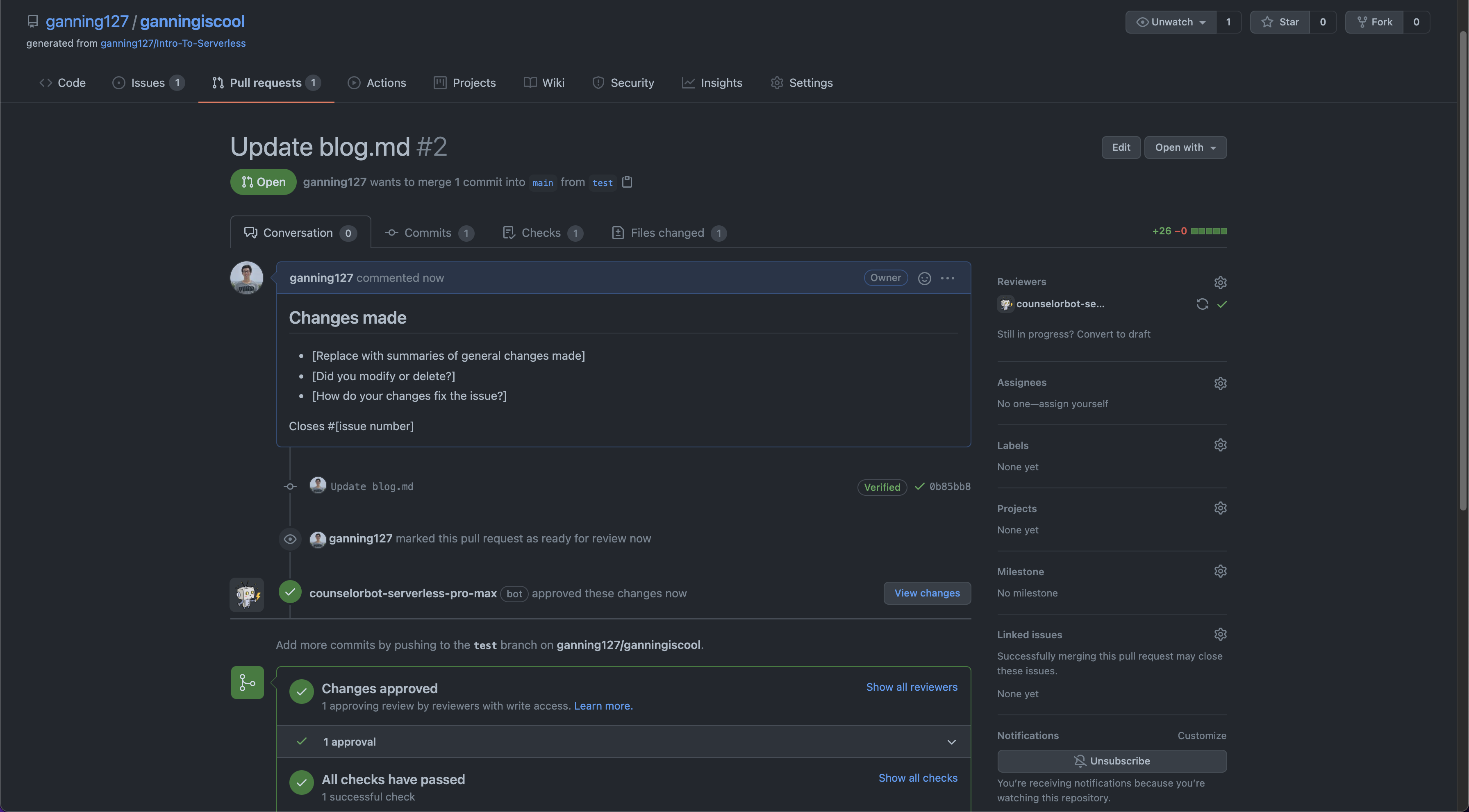 When a user installs CounselorBot on all of their repositories, the Bot is subscribed to EVERYTHING the user does (commits, new branch, pull request opening).

Therefore, when a user makes a commit, a workflow run will trigger, checking whether or not the code is valid. If the code is valid, the CounselorBot will approve the PR that was opened, and the user is allowed to move on to the next step.

If the workflow does not pass, then the bot will comment what went wrong with the check! 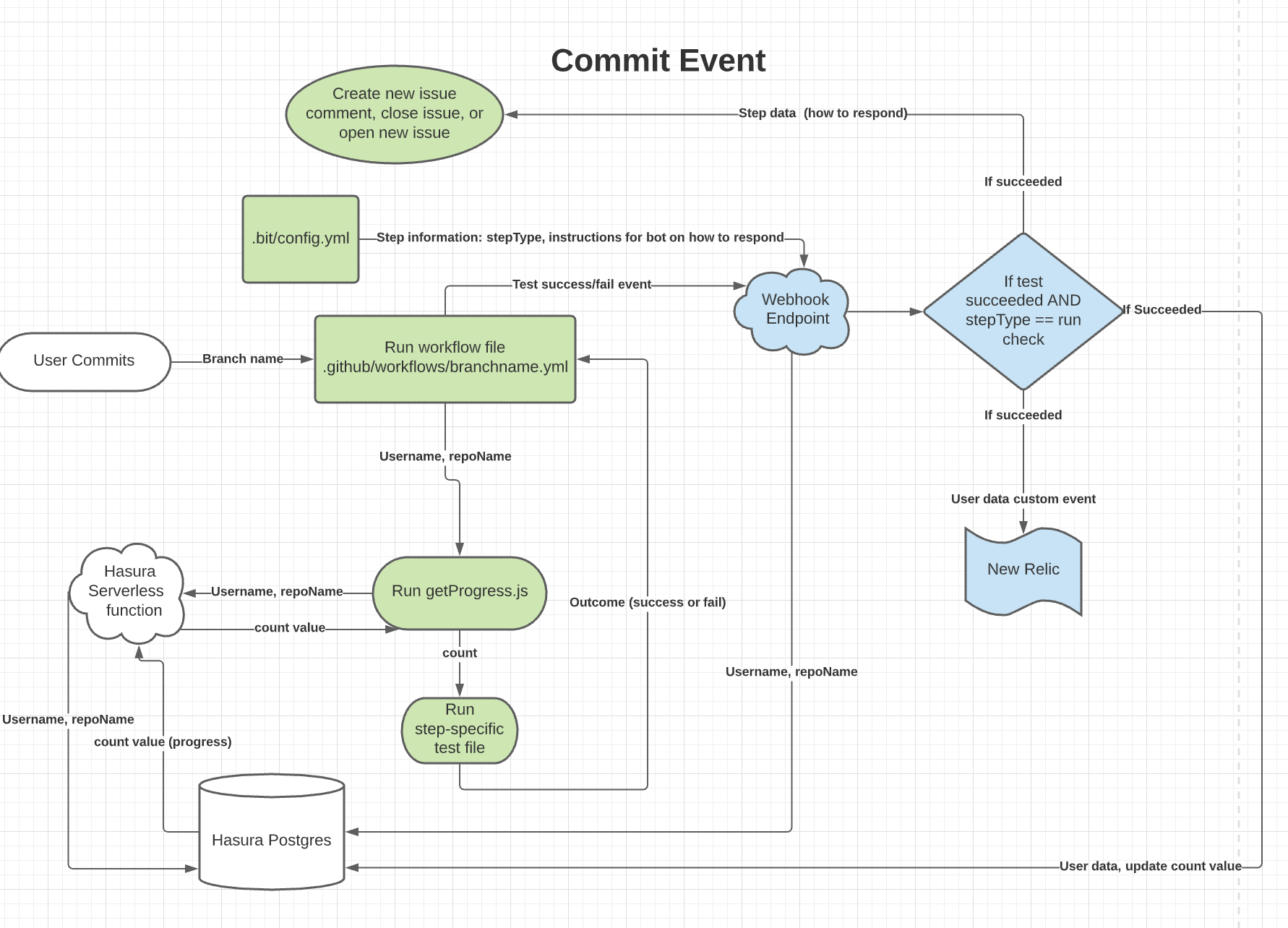 Woah, that was a giant flowchart... where do I start?

Basically, whenever the user commits code to a branch in the Serverless Repo, the CounselorBot will call the Github API and trigger a workflow run.

NodeJS was the language that the entire CounselorBot was written in. The Serverless Camp was my first time using NodeJS, and it allowed me to realize how I can write my own API.

Prior to the Serverless Camp, I've never even touched GitHub, much less using a bot to control repos, issues, and pull requests. Using the GitHub API allowed me to realize just how powerful APIs can be, and the sheer amount of data that GitHub actually collects from you 😲

Octokit was the actual interaction between the code and GitHub, allowing us to create issues, run workflows, and approve pull requests.

Previously, CounselorBot was deployed on Heroku as a node app. This was slow, expensive, and didn't provide an ideal user experience. As a solution, CounselorBot saves the day is now deployed on Serverless, using Azure functions. This allows us to scale up CounselorBot easier, and use a "pay as you go" idea using Azure's serverless features.

Students are able to comment a question for the CounselorBot by typing @counselorbot example help message. CounselorBot detects this and uses the Azure QnA maker to generate a response based on commonly asked questions for my cohort of the serverless curriculum.

CounselorBot's step skipper feature is hosted on Heroku as a node app. Though it may seem counterintuitive, using Heroku allowed us to create an smooth sailing Oauth sign in experience.

Each time a user with the CounselorBot installed makes a commit, a webhook payload is sent to the Azure endpoint:

In our Azure function code, we check for the type of event that was recieved via webhook:

Within the issues.closed event, we check for who is closing the issue, and whether or not the most recent issue comment is "closed via oauth".

This actually allows us to re-open issues when they are closed by the student, and not our Oauth step skipper app.

Speaking of which, that is also a new feature of CounselorBot Serverless Pro Max!

Step Skipper Do you have a step that you REALLY want to skip to, without doing all the previous steps? Maybe the first couple of steps are too easy, or you just want to repeat a couple of prevoius steps without using the instructions.

Well do not fear, Step Skipper is here!

Simply enter your GitHub username and repo name, and click Next Step 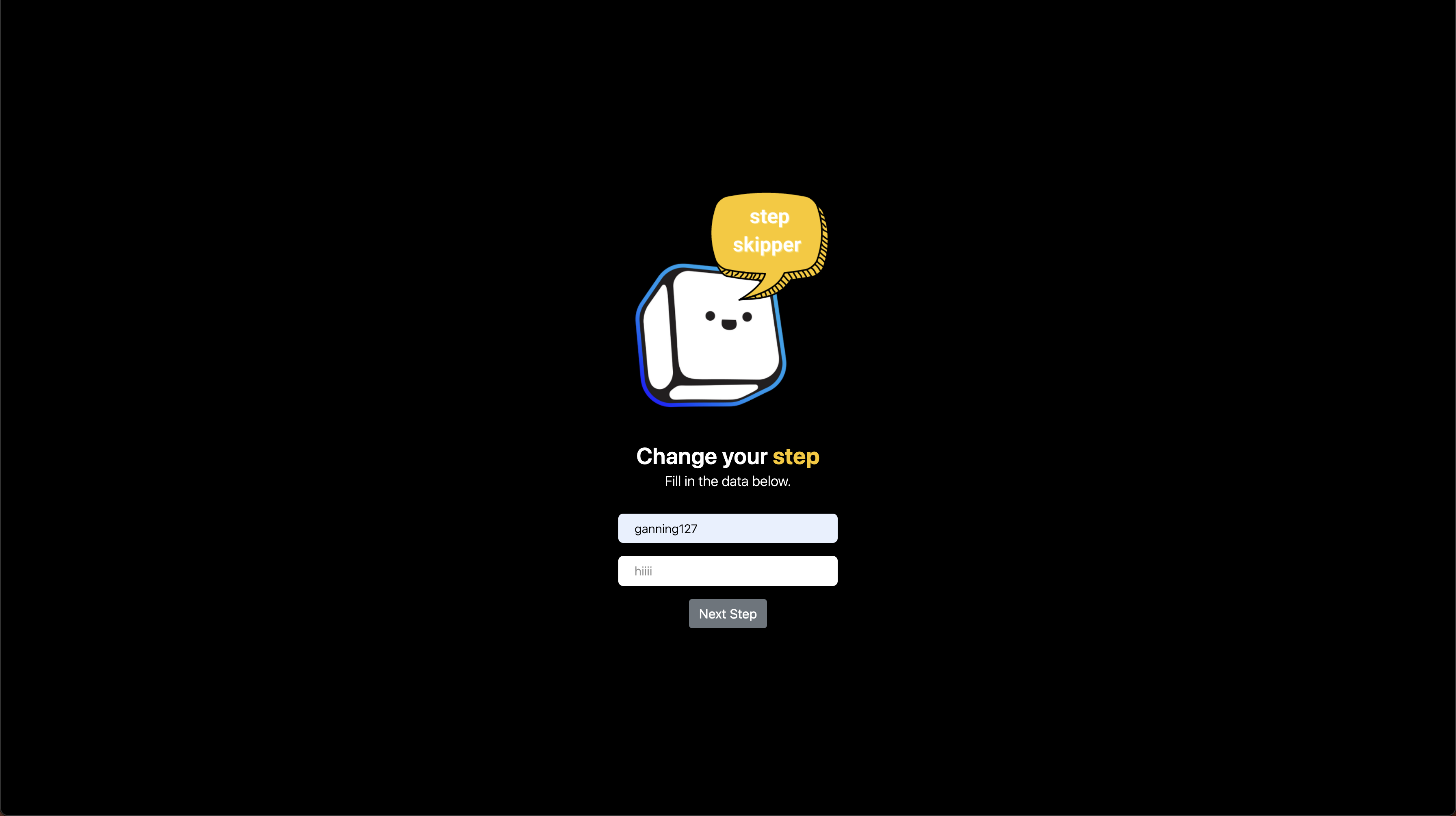 Choose from the dropdown which step you wanna skip to, and click change 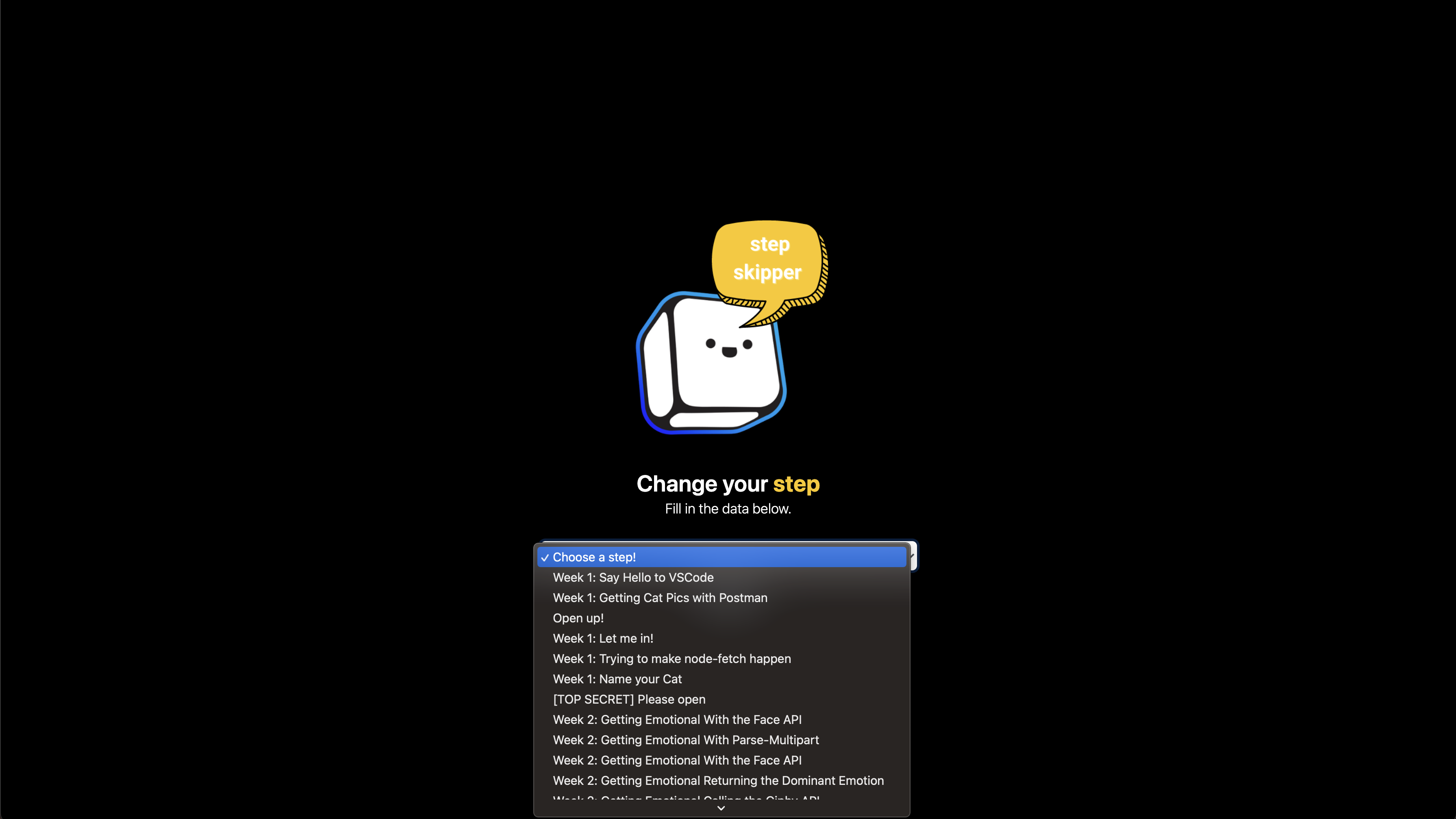 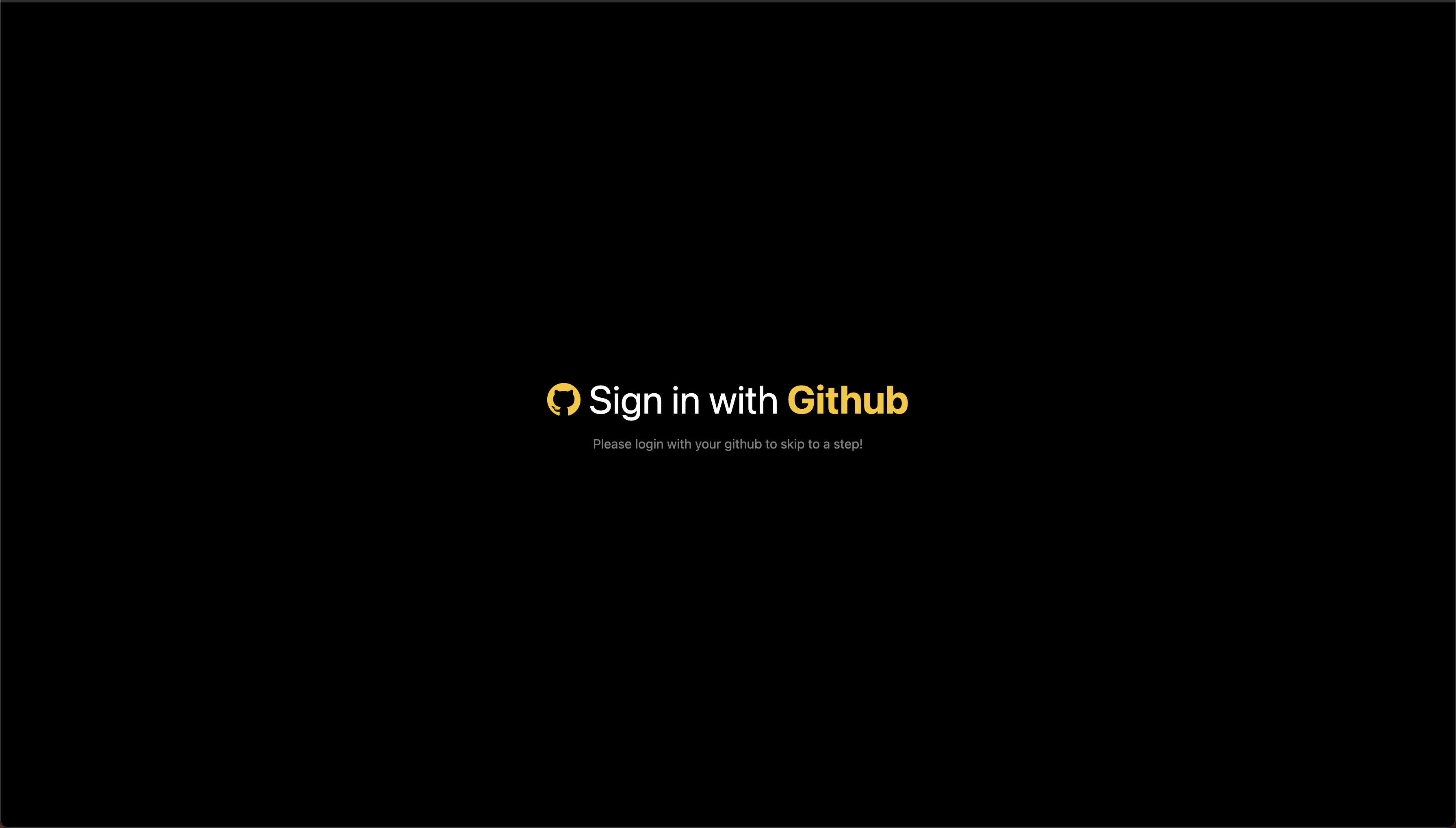 We just skipped to the chosen step! 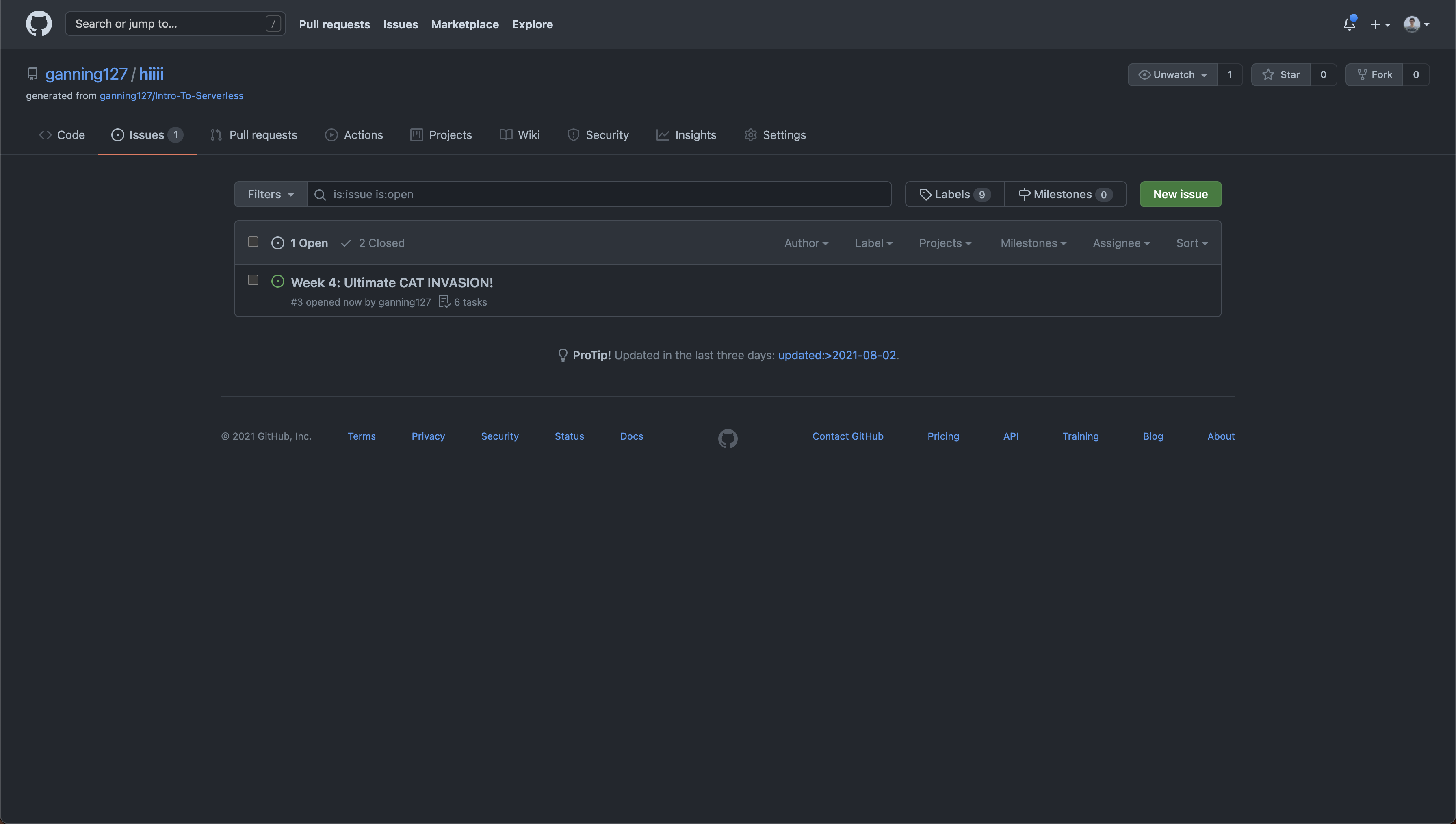 Adding these new features to CounselorBot opens countless doors for its use. Here are a couple of ideas that I would love to implement in the future:

Creating CounselorBot Saves The Day would not have been possible without the help of the Bit Project Team (especially Emily & Daniel).

Additionally, this entire project would not have been possible without my awesome mentors Anthony Chu (Sr. PM at Microsoft) and Gouthami Kamalnath (Software Engineer II at Microsoft). Thank you to both, Anthony and Gouthami for not only answering my technical questions, but also helping me figure out the tech industry as a whole 😊